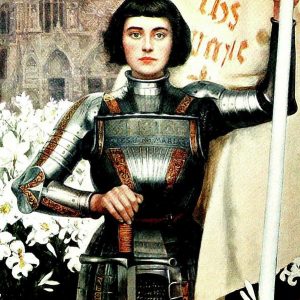 In 1425, young Joan of Arc began having visions. Mother of the Maid begins some four years later, when, in the opening scene, Joan decides to tell her mother about them.  Joan also reveals that she has made plans to meet the Dauphin (heir to the French throne) and to ask for an army to lead into battle against the English. From this moment on, the course of Joan and her mother Isabelle’s lives will be changed forever.

While Jacques and Pierre (Joan’s father and brother) are not on board with this plan, Isabelle, after consulting her priest, Father Gilbert, sees Joan for what she is—an extraordinary young woman. Isabelle ensures Joan and Pierre set off safely on their journey to meet the Dauphin. Isabelle then, after hearing about Joan’s successful encounter with the soon-to-be crowned king (Charles VII), decides to travel to the castle to see Joan. After walking for weeks, waiting for hours in the rain to be let into the castle, and then sitting with a Lady of the Court, Isabelle is finally reunited with her daughter in the king’s chapel. Joan, looking more like a heavenly saint than a peasant girl, receives her mother and blesses her.

Act two begins with Pierre telling his parents about Joan’s victory in battle. She has become the successful commander that her visions foretold, and her entire family has joined her at court. But the celebration of victory is cut short as Isabelle learns of Joan’s capture by the English. Isabelle turns to Father Gilbert and the Lady of the Court for help, but no one seems to have any real assistance to offer. She then does what only a mother could do, and goes to Joan in her cell to help her prepare for the burning that she must endure due to her guilty sentencing as a heretic. We are left with the family, who talk of their lives without Joan, to wrap up this deeply moving drama about the glories and challenges of raising an exceptional child.

Mother of the Maid: Fact or Fiction

Who is Your Hero?