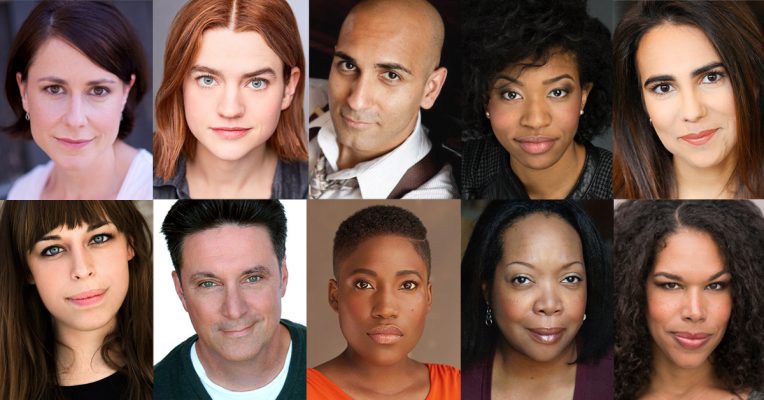 BJ Jones comments, “Next season is both fresh and familiar, bold and brash, the kind of work we challenge ourselves with season after season – and we’re showcasing a spectrum of artists ready to meet the challenge! A combination of familiar faces and exciting newcomers highlight our upcoming season. We’re delighted to bring Northlight audiences some of their returning favorites, and to introduce them to even more members of the incredibly deep talent pool that Chicago has to offer.”

MOTHER OF THE MAID
By Jane Anderson
Directed by BJ Jones
Featuring Kate Fry (Isabelle Arc), Kareem Bandealy (Jacques Arc), Hayley Burgess (Monique), Ricardo Gutierrez (Father Gilbert/Chamberlain/Guard/Scribe), Casey Morris (Pierre Arc), Grace Smith (Joan Arc) and Penelope Walker (Lady of the Court)
September 12 – October 20, 2019
Isabelle Arc is a hard-working, pious peasant woman with an odd and extraordinary daughter. When adolescent Joan announces she’s having visions, her mother isn’t quite sure if she should credit the Holy Spirit or teen hormones. But with faith in God and her destiny, Joan sets off to lead the French at war. As she ascends from farm girl to holy martyr, we follow the unexpected perspective of her proud, fierce, and frightened mom in this deeply moving drama about the glories and challenges of raising an exceptional child.

The World Premiere of
THE WICKHAMS: CHRISTMAS AT PEMBERLEY
By Lauren Gunderson and Margot Melcon
Directed by Jessica Thebus
Featuring Jennifer Latimore (Lydia Wickham), Jayson Lee (Brian), Will Mobley (George Wickham), Aurora Real De Asua (Cassie), Penny Slusher (Mrs. Reynolds), Luigi Sottile (Mr. Darcy) and Netta Walker (Mrs. Darcy).
November 7 – December 15, 2019
From the authors of Miss Bennet: Christmas at Pemberley comes a charming new companion piece!
While the Bennets and Darcys are celebrating upstairs, the servants below stairs find themselves in the midst of a holiday scandal. Lydia’s ne’er-do-well husband Mr. Wickham has arrived, and it’s up to the loyal housekeeper, footman, and new maid to keep the festivities running smoothly without revealing the unwelcome guest. As old misunderstandings and new secrets start to spiral out of control, the residents of Pemberley prove that family, forgiveness, and the true spirit of giving always win the day.
The Wickhams: Christmas at Pemberley is a rolling world premiere commissioned and originally produced by Northlight Theatre with The Jungle Theater, Minneapolis, MN; and Marin Theatre Company, Mill Valley, CA.

The World Premiere of
HOW A BOY FALLS
By Steven Dietz
Directed by Halena Kays
January 23 – March 1, 2020
Featuring Cassidy Slaughter-Mason (Chelle), Sean Parris (Sam), Tim Decker (Paul), Michelle Duffy (Miranda), Travis A. Knight (Mitch)
This world premiere from one of America’s essential playwrights will keep you on the edge of your seat!
A newly hired au pair is thrust into the midst of a mystery when the loss of a young boy casts suspicion on her and the boy’s wealthy parents. The parents are each seeking answers and retribution while the au pair is hatching a dangerous scheme of her own, and no one is exactly who they seem to be in a new psychological thriller that asks who can we trust… if we can trust anyone.

INTIMATE APPAREL
By Lynn Nottage
Directed by Tasia A Jones
Featuring Yao Dogbe (George), Rashada Dawan (Mayme), Sean Fortunato (Mr. Marks), Mildred Marie Langford (Esther), Tiffany Scott (Mrs. Van Buren) and Jacqueline Williams (Mrs. Dickson).
March 12 – April 19, 2020
New York Drama Critics’ Circle and Outer Critics Circle awards for Best Play!
In 1905, a black seamstress named Esther sews her way out of poverty stitch by delicate stitch, creating fine lingerie for her Manhattan clientele while longing for a husband and a future. She finds common ground with the Jewish merchant who sells her fabric, yet both know their relationship cannot be. So when correspondence with a lonesome Caribbean man leads to a marriage proposal, she accepts. But as her new marriage quickly turns to regret, Esther turns back to her sewing machine to rebuild her life and refashion her future.

SONGS FOR NOBODIES
By Joanna Murray-Smith
Directed by Rob Lindley
Music Direction by Andra Velis Simon
Featuring Bethany Thomas
May 7 – June 14, 2020
This one-woman tour-de-force celebrates the iconic work of Judy Garland, Patsy Cline, Billie Holiday, Edith Piaf and Maria Callas. Share in the unexpected encounters between these legendary divas and the ordinary women whose lives were changed by their brush with fame. Featuring such favorites as “Come Rain or Come Shine,” “Crazy,” and “Ain’t Nobody’s Business If I Do,” Songs for Nobodies illuminates the power of song to share a story, heal a heartbreak, and inspire a dream.

Need to get in touch?