The Book of Will play is true to the facts as we know them and based on in-depth research. However, there are places where the historical record is silent, and this is where Lauren Gunderson’s imagination takes flight. For example, we know that John Heminges had a daughter named Alice, but we don’t know if she took part in the creation of the First Folio. Many scholars think that Emilia Bassano-Lanier was “the Dark Lady” of the sonnets, but we don’t know whether she actually helped fund the legacy of Shakespeare.

Here are some facts we do know about the major players in The Book of Will:

John was baptized in 1566 in Droitwich, Worcestershire, England, and at the age of 12 he was an apprentice of a London grocer. A significant member of the King’s Men, he appeared in a number of plays including Every Man in His Humour and Volpone and was probably the first to perform the role of Falstaff. His most important role in the company, however, was that of business manager. He held this position for over 25 years and after 1611 he rarely acted. Heminges was one of the original shareholders of the Globe and in 1608 the Blackfriars theaters. He owned the house attached to the Globe Theatre that was probably used as an Ale House. He died in 1630.

Rebecca was born in 1571. Her first husband, William Knell, was a famous player in the Queen’s Men. This marriage was cut short when Knell died in a duel, leaving Rebecca a widow at the age of 15. She remarried shortly after in 1588 to John Heminges, who along with his work in the theatre was also a wholesale grocer. It is very likely that Rebecca helped to manage the grocery business and sold concessions at the Globe Theatre. Rebecca died in 1619 and 11 years later her husband asked in his will to be buried in St. Mary Aldermanbury so he could remain close to her in death.

John and Rebecca Heminges had fourteen children between 1590 and 1613, with three of them having likely died as infants. We don’t know many specifics, thus the character of Alice Heminges is largely created from the playwright’s imagination. But it is true that many women at the time functioned as alewifes and brewed beer to sell in local establishments. 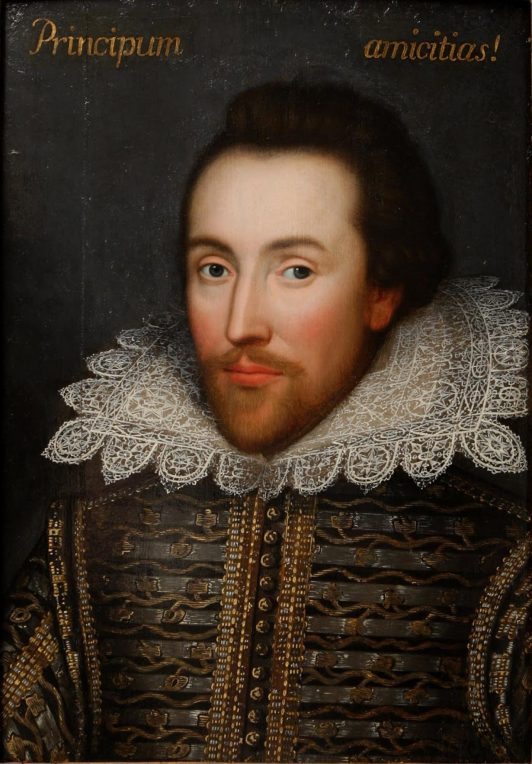 Born in Norfolk as the son of a fishmonger, Condell could have been acting as early as 1590, but his first certain stage appearance was in 1598 in Ben Johnson’s Every Man in His Humour. He performed with the Lord Chamberlain’s Men/The King’s Men until he retired around 1623. He joined as a co-owner of the Globe Theatre in 1605 and later as a co-owner of the Blackfriar’s playhouse in 1608. He, along with John Heminges, was a leader in the sponsoring and preparation of the First Folio of Shakespeare’s work published in 1623. He died only four years later in 1627.

Elizabeth Smart married Henry Condell in London on October 24, 1596 at St. Laurence Pountney. She was the only child of John Smart, a gentleman of the Strand. Elizabeth and Henry settled in St Mary Aldermanbury. She had nine children, but only three survived to adulthood. Elizabeth died in 1635.

Richard was the son of James Burbage, who built the Theatre in Shoreditch. Burbage was a famous and successful actor before the age of 20. He is known for having originated many of the major leading characters in Shakespeare’s plays, including Hamlet, Lear, Othello, Macbeth, Henry V, Romeo and Richard III. He and his brother, also a famous actor at the time, led the disassembling of the Theatre and the construction of the Globe in 1599. Burbage died in 1619, and his life was honored by many writers who appreciated the lasting contribution he made to their work. 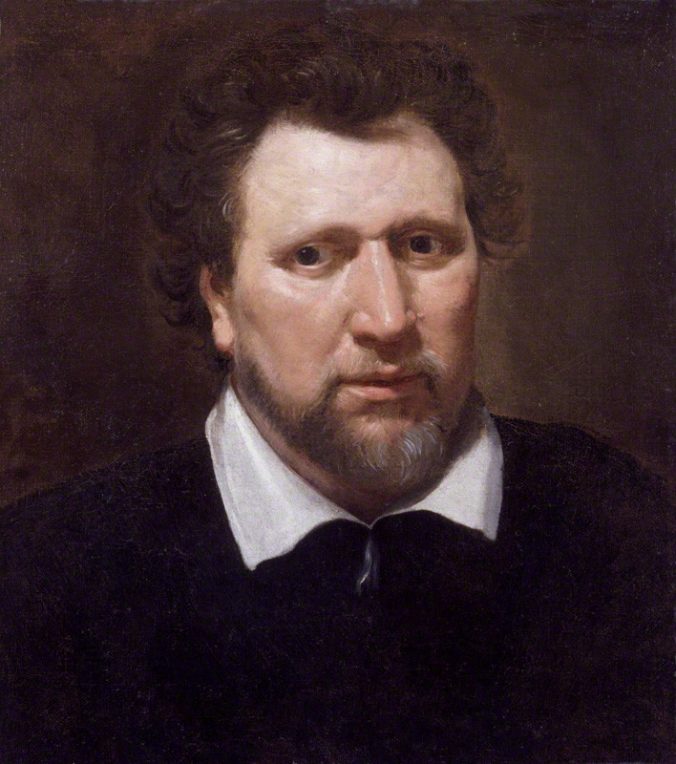 Johnson wrote what is considered his first great play, Every Man in His Humor, in 1598; a 1616 production featured William Shakespeare in one of the lead roles. Shortly after the play opened, Johnson killed Gabriel Spencer in a duel and was tried for murder but was released by pleading “benefit of clergy” (i.e., by proving he could read and write in Latin, he was allowed to face a more lenient court). Shortly after his release he was again arrested for failing to pay an actor. Under King James I, Johnson received royal favor and patronage. Many of his most famous satirical plays, including Volpone (1606) and The Alchemist (1610), were produced for the London stage and he also wrote for the court. He is often identified as England’s first Poet Laureate. Within his own lifetime and the century after, Johnson was more popular than Shakespeare.

Born Emilia Bassano, she was the daughter of a Venetian musician who served Queen Elizabeth. Lanier published her first volume of poems, Salve Deus Rex Judaeorum [Hail, God, King of the Jews], in 1611 and it is considered the first major collection of poems in English by a female writer. She entered into an affair with Queen Elizabeth’s cousin Henry Carey, but he left her when she became pregnant with his child. Lanier’s legacy today is mainly in her proto-feminist visions and writing, but she also is one of the candidates for “the Dark Lady” in Shakespeare’s sonnets because of her Italian-Jewish heritage, her musical skill, and her reputation in court. Scholars find the Dark Lady myth an unwelcome detraction from Lanier’s own considerable literary achievements.

Knight was the prompter or bookkeeper of the King’s Men. This means that he prepared the company’s play texts for production, adding stage directions, cues for offstage sounds, and other necessary information to turn an author’s or scribe’s manuscript into a promptbook. When issues involving censorship came up, he was the one that resolved them.

Crane began his career as a law clerk and then became a professional scribe working for attorneys. Later in his life he turned to writing verse. By 1618 he was working for the King’s Men, producing multiple transcripts for their plays. He published a collection of his own poems in 1621 called The Works of Mercy, Both Corporeal and Spiritual. He died in 1630.

William Jaggard developed one of the largest print shops of his generation. In 1599 Jaggard published the Passionate Pilgrim and claimed that the entire collection was by William Shakespeare (though only five of the twenty poems actually were). A 19th century critic characterized Jaggard as an ‘infamous pirate, liar, and thief,’ yet Jaggard held a lot of power.  In 1604 a Royal warrant ordered that all parish churches in England display copies of the Ten Commandments published exclusively by William Jaggard. He was also the only one with the right to publish playbills and thus dealt a lot with the professional theatre companies. In 1613 he began to go blind, likely a symptom of syphilis or mercury poisoning, and died in 1623.

Isaac was given full membership to the Stationer’s Company in 1613– as the son of a publisher he didn’t have to serve an apprenticeship to receive the position. In 1619 the Jaggards teamed up with Thomas Pavier to publish a collection of Shakespeare’s plays in quarto, but the King’s Men objected and the Lord Chamberlain ordered that none of the plays could be printed without their consent. Work on the First Folio began in the Jaggards’ shop in 1622, but got interrupted several times to continue efforts on other large book orders. Isaac was appointed Printer to the city of London after his father’s death, then died four years later in 1627. 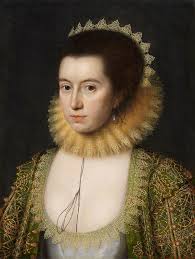 Born around 1556, Anne grew up in the Stratford area where the Hathaway family was well-esteemed. She was 26 when she married William Shakespeare, who was 18 at the time. Anne and Will entered a rushed marriage while pregnant with their first child, Due to these circumstances and the age difference, some scholars have theorized that both parties might have been reluctant to go through with it. Another theory is that Will pursued her hand due to her family’s high society status. Anne and Will had three children: Susanna in 1583 and the twins Hamnet and Judith in 1585. While Shakespeare was off establishing his theatre career in London, Anne and her children remained in Stratford, living in the house of John Shakespeare. After Will’s death in 1616, Anne Hathaway lived in The New Place until she died in August 1623.

Susannah Hall, daughter of William Shakespeare, was born in 1583 and died in 1649, buried next to her parents. She married John Hall, a local physician and well-regarded Puritan. Her brother Hamnet died in 1596 and her sister Judith was given very little in Shakespeare’s will because of her husband’s poor reputation. Thus Susannah was the main inheritor of her father’s estate, the property passing down from her to whatever male offspring she had. She had none, giving birth to a daughter, Elizabeth, in 1608. Elizabeth died in 1669, the last descendent of William Shakespeare, leaving no heirs.